For at least one day, in one state, the long-promised political revolution of Mr. Sanders came to vivid life, a multiracial coalition of immigrants, college students, Latina mothers, younger black voters, white liberals and even some moderates who embraced his idea of radical change and lifted him to victory in the Nevada caucuses on Saturday.

Mr. Sanders delivered his victory speech Saturday evening not in Nevada, but in Texas, one of the diverse powerhouses on the Super Tuesday calendar.

In the entrance polls on Saturday, Mr. Sanders led the field across many demographic groups: men and women, whites and Latinos, union and nonunion households, and across education levels.

Strong showings in the first two states have not significantly helped former Mayor Pete Buttigieg and Senator Amy Klobuchar break through with nonwhite voters. Former Vice President Joseph R. Biden Jr. has called himself the one candidate who can build a diverse coalition, but he finished in second place in Nevada, the most diverse nominating contest so far.

Only Mr. Sanders, with his uncompromising message that working-class Americans affected by injustice can unite across ethnic identity, has shown traction in both predominantly white Iowa and New Hampshire and the more black and brown Nevada. 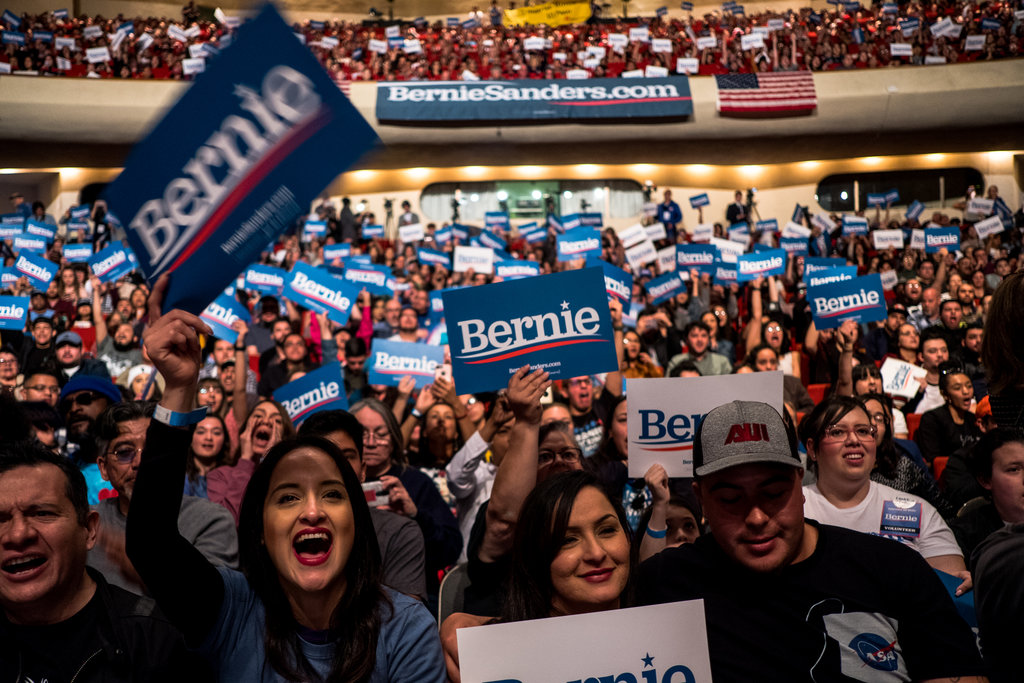 "The Vermont senator has long brushed off political vulnerabilities and evaded attacks from rivals. But the spotlight on his front-runner status and possible Russian interference could pose challenges."

CNN, Jan 13, 2020
"Bernie Sanders told Elizabeth Warren in private 2018 meeting that a woman can't win, sources say"
Jan 14: "Senator Warren, what did you think *when* senator Sanders told you a woman could not win the election"

Clinton, Jan 21, 2020:
"He was in Congress for years. He had one senator support him. Nobody likes him, nobody wants to work with him, he got nothing done. He was a career politician. It's all just baloney and I feel so bad that people got sucked into it."

Nymag.com, Jan 28, 2020:
"Running Bernie Sanders Against Trump Would Be an Act of Insanity.
For the socialist left, which has no other standard-bearer to choose from, Bernie is too big to fail. The question is whether the Democratic Party, the only political force standing between Donald Trump and his authoritarian ambitions, will risk failing with him."

Jeff Bezos Post, Jan 13, 2020:
"In sum, Sanders would provide an easy target for Republicans and deprive the Democrats of a mainstream alternative to Trump who is steadier on foreign policy and fiscally more responsible. Sanders might have gone negative at just the wrong time — that is, on the eve of the Jan. 14 debate.
His opponents certainly will have every incentive to attack him, or at the very least defend themselves with some inconvenient truths about the socialist’s electability problems. Others such as Buttigieg and Klobuchar might choose to point out that negative attacks among septuagenarians is a good reason to find new, positive voices who can get things done. If nothing else, Sanders might wind up reminding Democrats that he really is not the candidate who’s best-equipped to unify the party."

Bloomberg, Dec, 2019:
"According to "federal campaign records reviewed by Bloomberg," the Sanders campaign shelled out $233,348.51 and the Warren campaign spent $151,240.90 on Amazon purchases "in the first nine months of 2019, mostly on office supplies." The report adds that Michael Bloomberg's campaign finance records weren't yet available because he had just entered the race in November."


But Matthews said it was "too late" to stop him, at one point comparing Sanders' victory over other top Democratic contenders to Hitler's invasion of France.

"I was reading last night about the fall of France in the summer of 1940 and the general, Reynaud, calls up Churchill and says, 'It's over.' And Churchill says, 'How can that be? You've got the greatest army in Europe. How can it be over?' He said, 'It's over.'"

Joe Lockhart was White House press secretary from 1998-2000 in President Bill Clinton's administration. He co-hosts the podcast "Words Matter." The opinions expressed in this commentary are his own. View more opinion at CNN.

If Bloomberg wants to make it past the Democratic National Convention in July, his strategy needs to change --quickly. His first objective is to nab the nomination, and to do that, he needs to direct his resources to take down Sanders before he even has a chance at Trump.

As it stands, Sanders has a chance to run the table as the rest of the field fights each other for the honor of coming in second. Sanders has emerged as the Democratic front-runner, and his support stands at 25% among Democrats and independents who lean Democratic, according to the most recent Quinnipiac poll.


But that's not enough to win the general election. I don't believe the country is prepared to support a Democratic socialist, and I agree with the theory that Sanders would lose in a matchup against Trump. In a general election battle between two divisive figures who both preach the politics of grievance, I believe Trump will win the battle to the bottom and remain the last man standing.

Bloomberg needs to use the next $400 million in ad spending to attack Sanders on his potential weaknesses in a general election and highlight how far left his campaign is. Hitting him on his past record on guns is a must.

Bloomberg also needs to drive home the fact that very little of what Sanders has proposed has any chance of being implemented without serious challenges and major compromises, as even, for example, Rep. Alexandria Ocasio-Cortez admitted on Medicare for All.

Sanders' praise of Soviet-backed regimes is ripe for political attack ads -- and if Bloomberg doesn't take advantage of this, Trump certainly will in the fall. Finally, Sanders' legislative record of achievements is lacking, and the difficulty he faces in garnering support among both Democratic or Republican lawmakers can be highlighted.

The sinking of the Titanic was a miracle to the lobsters in the ship's kitchen.
Top

Users browsing this forum: No registered users and 15 guests